Why no kiwi, Mr Shakespear?

I have just finished reading 19 diaries written between 1897 and 1910 by members of the Shakespear family, the first government-appointed caretakers on Hauturu after the island was unlawfully taken from mana whenua. They did not record a definite sighting of a kiwi in the wild on the island, but they did know that kiwi were there.

We are now certain that North Island brown kiwi (Apteryx mantelli) have been on Hauturu for a very long time—well before half a dozen kiwi were released on the island in the late 19th Century. Some early European visitors recorded kiwi, while others said there were none. This is probably not surprising as kiwi can be hard to find—especially when numbers are low, the search is only during the day, and the searcher has not previously observed kiwi sign (like droppings and feathers.) 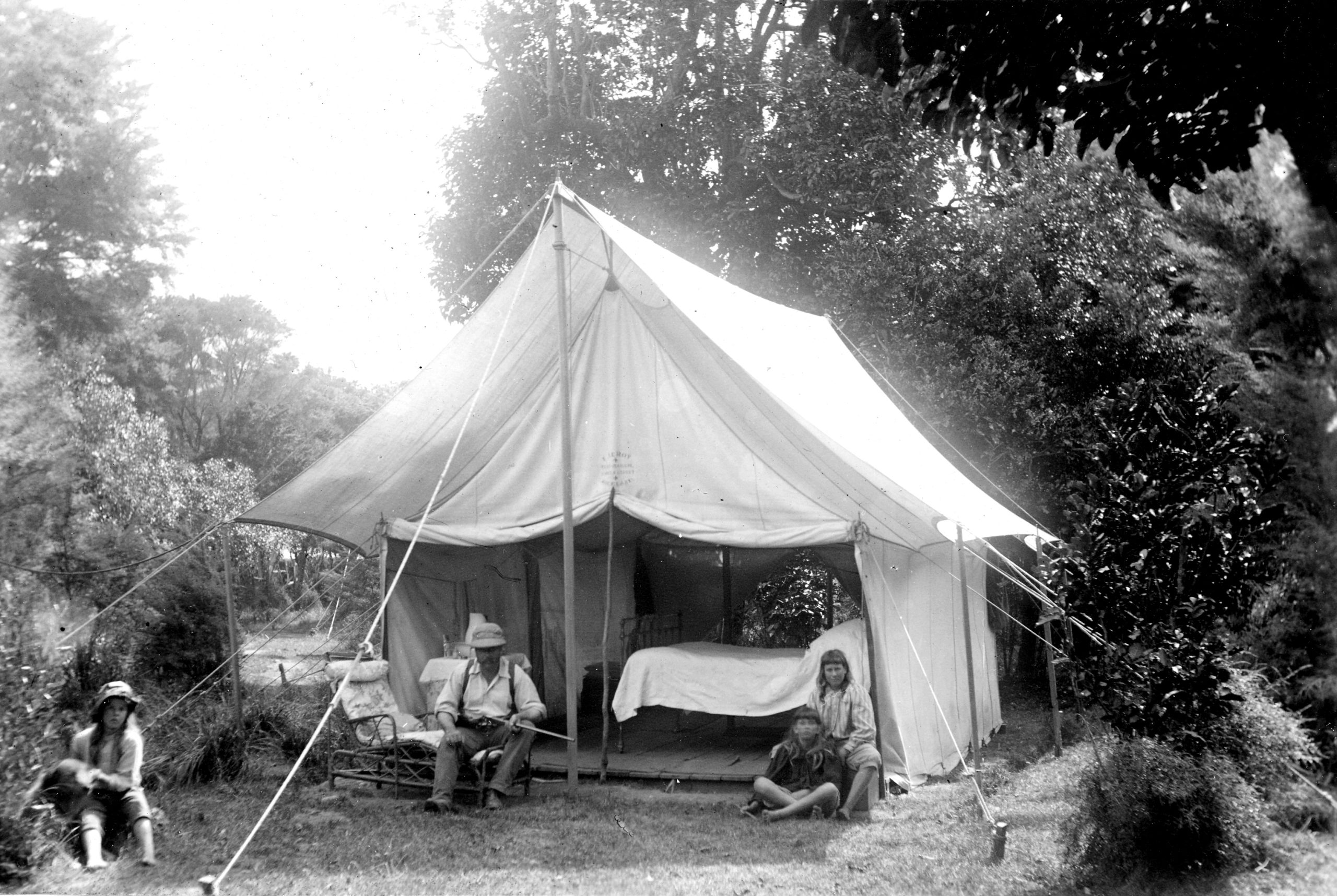 In 1897, the Shakespear family lived in tents on Hauturu. Robert has a shotgun on his lap, his wife Ethel sits with their daughter Judy, and daughter Jo (left) has her own pet dog. That year, a wild dog scavenged around the camp, and Robert eventually poisoned it.

In January 1897 Robert Shakespear wrote: ‘I think I saw a kiwi.’

Shakespear was aware that kiwi should have been present. During his first few weeks on the island Tenetahi Brown (one of the mana whenua residents evicted from the island by the Crown in 1896) had told him that he thought there were two kinds of kiwi on the island and that they were on the northern end.

On 15 October 1898 Robert Shakespear killed a sheep at Pohutukawa Flat. A month later the family were there again and noticed that kiwi had been busy with the offal of the sheep they killed. A decade later, on 7 March 1909, some of the family and visitors went up what’s now called the Thumb Track after dark to listen for kiwi, but reported “no discovery made”. The next evening they went up the Valley Track, but also found none: “uneventful watch in the moonlight”. 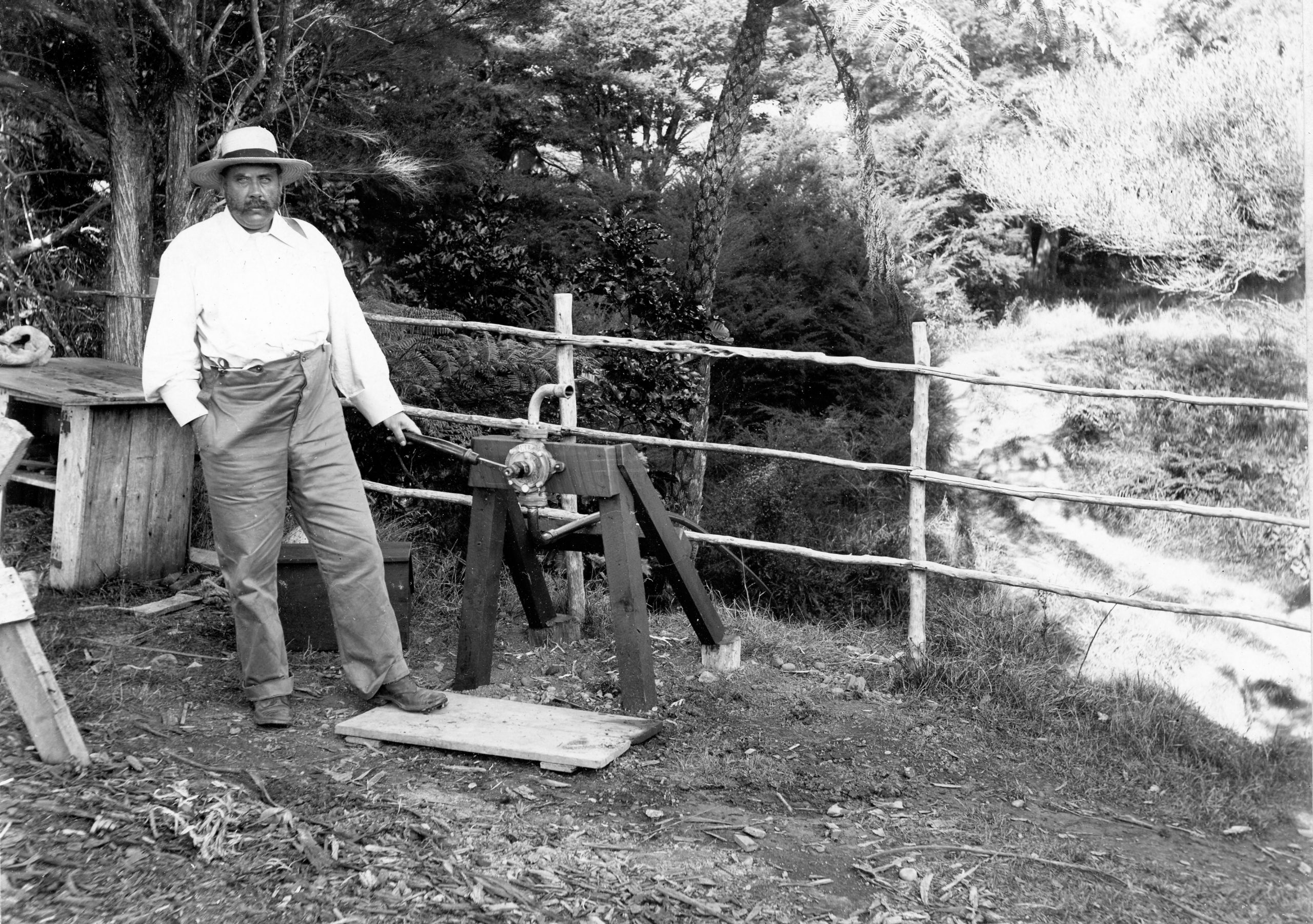 Robert Shakespear with the island’s water pump in 1901 (though it only worked for a few days after rain.)

Where had they gone? Cats, introduced about 1870, were not recorded as eating kiwi on Hauturu as they had plenty of rats available, and seasonally, petrels. But it is possible that free- ranging dogs reduced their numbers. These dogs would not have been truly wild as there was probably insufficient food for year-round survival. Dogs find kiwi scent very attractive and a kiwi easy to track and grab. If a dog attempts to hold a kiwi in its mouth the kiwi will die—being flightless, they have no muscle mass to protect their rib cage.

About six weeks after the Shakespear family arrived on the island they shot a dog that was visiting their camp at night. If that dog had been roaming for a year, living on petrels in season, scavenging around camp and taking one kiwi a week, that would be 50 kiwi, or 8% of the population, gone each year.

If there were two dogs over 20 years it is easy to believe the kiwi population could have been decimated.

There is one kiwi specimen that pre-dates the first government kiwi liberation in 1898: a brown kiwi that the Austrian naturalist Andreas Reischek collected in 1882. It is from this specimen that contemporary biologist Ricardo Palma obtained a new species of louse, unique to Hauturu, which he named Rallicola (Aptericola) rodericki, and which have since been found living on other Hauturu kiwi.

Further evidence of brown kiwi being native to the island was provided by researchers John Herbert and Charles Daugherty, who found a unique haplotype—a set of DNA variations—in brown kiwi blood samples from Hauturu. Brown kiwi on Hauturu today are a genetic mix of the original population and kiwi translocated from various parts of the mainland.

Brown kiwi are now on all parts of Hauturu. A survey in 2002 recorded a call rate of 24 calls per hour giving a population estimate of 240–300 pairs, based on a territory size of 10–12.5 hectares per pair.

One of the joys of a Hauturu visit is to hear a kiwi call splitting the still of the night.