Beneath the Waves: The Need for Marine Protection around Hauturu

Te Hauturu-ō-Toi is one of Aotearoa’s most treasured and protected islands—so much so, it is a great privilege to even be able to venture onto the land! The surrounding marine environment is another story. Anyone is welcome and you can help yourself to any species you choose. Some use industrial-scale and habitat-damaging fishing equipment to do so.

These extremes in how we manage the land and sea are evident from space: diverse and dense forests characterise the land, but many of Hauturu’s underwater forests are missing. Colwyn Trevarthen, now an Emeritus Professor at the University of Edinburgh, documented the underwater reefs around Hauturu in the early 1950s. He reported “dense forests of seaweed” that “could be seen to penetrate many fathoms”. Notably, his description did not mention the common sea urchin or “kina”. 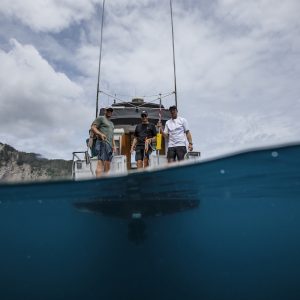 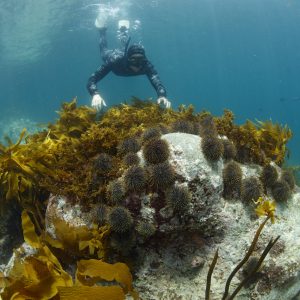 Diverse and dense forests characterise the land, but many of Hauturu’s underwater forests are missing.

Nowadays, anyone who puts their head below water around Hauturu is greeted with a dramatically different underwater seascape: barren reefs have replaced the “dense forests of seaweed”. Vast numbers of grazing kina are the culprits. The deforested areas of reef, widely known as “kina barrens”, have a greatly reduced biodiversity and productivity. Why have the kina proliferated? Because overfishing has depleted their main predators: tāmure (snapper) and kōura (crayfish).

My team at the University of Auckland’s Institute of Marine Science have been studying the underwater reefs at Hauturu as part of a wider project on kina barrens in Tīkapa Moana/Te Moananui-ā-Toi/The Hauraki Gulf. The research is funded by Foundation North’s Gulf Innovation Fund Together (G.I.F.T) and Live Ocean. It aims to understand the extent of kina barrens in the Gulf and identify how marine protection, combined with other types of management intervention can be used to restore healthy rocky reef ecosystems.

As part of this project, Lisa Dartnall, an MSc student, is using a combination of contemporary satellite imagery and historic aerial imagery to map the expansion of kina barrens over time at Hauturu.She has found that about one-third of the reef around the island is now kina barren. This stark zone devoid of seaweed forests dominates shallow reefs and encircles most of the island. In more sheltered areas, it is largely restricted to depths of less than eight metres; on the exposed northeastern part of the island, it is more extensive and penetrates to greater depths. 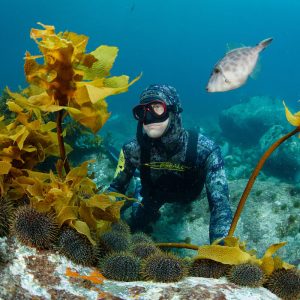 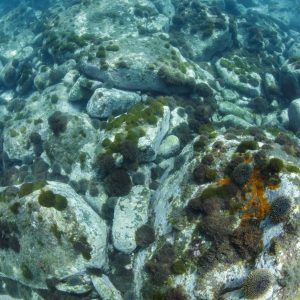 Dartnall’s work confirms Trevarthen’s observation that kina barrens did not occur on the reefs around Hauturu in the 1950s. She also found evidence that by the late 1970s, after decades of commercial fishing of tāmūrē and kōura, kina barrens were already well-established on the shallow reefs at Hauturu. Since then there have been improvements in fisheries management. But kina continue to proliferate because the population of large predators like tāmure and kōura remains low. The long-term loss of Hauturu’s underwater forests is a major concern. It impacts the wider island ecosystem, including the many species both under and above the water that depend on kelp and seaweeds. We know from research in long-established marine reserves—for example, at Goat Island and Tāwharanui, where fishing is completely prohibited—that these long-term changes can be reversed. Within those reserves, resurgent populations of large tāmūrē and kōura gradually led to the decline of kina and the eventual recovery of shallow-water kelp forests. In the same way, marine protection around Hauturu would allow recovery of kelp forests and associated species, even if this would likely take decades.

PhD student Kelsey Miller, working in partnership with Ngāti Manuhiri, is researching how active kina removal can enhance and accelerate kelp recovery. Kelsey has undertaken controlled experimental removals at four locations in the Gulf, including a site on the northern coast of Hauturu. We expected the kelp to recover when the kina were removed. What we didn’t expect was how quickly it returned, along with other seaweeds. Less than a year after the original kina removal in March last year, seaweed forests now dominate much of the area.

Less than a year after the original kina removal in March last year, seaweed forests now dominate much of the area.

These experiments demonstrate that kina are the primary factor limiting seaweed forests in the barren zone. They show too that the shallow water forests of Hauturu can still be restored. Active removal of kina from barrens is a tool that could help with accelerating kelp recovery. But this approach does not provide a complete and long-term solution to ecosystem restoration. What needs to be addressed is overfishing. That is the cause of kina overpopulation and the main stressor acting on marine species and ecosystems at Hauturu. Full ecosystem restoration at Hauturu requires protection from fishing—in particular, protection of the large predators that once patrolled the reefs and allowed the “dense forests of seaweed” reported in the 1950s to flourish. 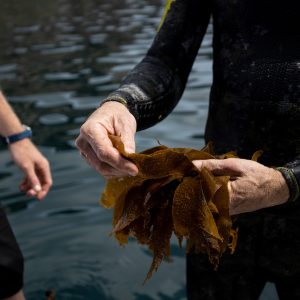 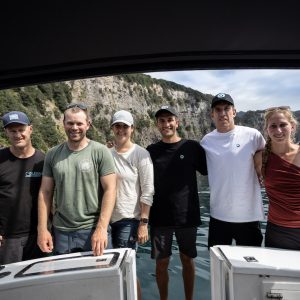 The northern coast of Hauturu and adjoining marine habitats are currently proposed as a High Protection Area as part of Tai Timu Tai Pari – The Hauraki Gulf Marine Spatial Plan. Protection of this area from fishing would provide an important step towards restoring Hauturu’s marine ecosystems.

As a nature reserve, Hauturu’s land environment is protected and respected. The time has surely come to do the same to the marine environment in this important and iconic island ecosystem.

Dr Nick Shears is an associate professor in the Faculty of Science at the University of Auckland. Since 2018 he has been the Deputy Head (Research) at the Institute of Marine Science.

Beneath the Waves: The Need for Marine Protection around Hauturu