By: By Matt Rayner Curator of Land Vertebrates, Auckland Museum

The New Zealand storm petrel (NZSP) was thought extinct for a century until its rediscovery at sea in the Hauraki Gulf in 2003. After much detective work, in 2012 a population was discovered breeding in Hauturu’s forests, where the birds had persisted in low numbers until the eradication of cats and rats in 1980 and 2004 respectively.

Since then, the NZSP recovery group—made up of national and international researchers—has been attempting to decipher the secrets of this diminutive 35-gram seabird.

Of particular importance for the species is its official “conservation status”: the national category of perceived threat used to prioritise species conservation funding in a country where our list of threatened flora and fauna is depressingly long (and growing), and our conservation dollars perpetually falling short.

Threat status is typically determined mainly by the number of individuals and populations and whether they are growing or shrinking.

Between 2014 and 2018 we set about answering the first of those questions with a mark recapture study of NZSP on Hauturu. We used spotlights to help us capture birds and tag them, and then counted how often those marked individuals were re-caught. The study revealed a population of approximately 1600 birds, and a repeat is planned for 2023 to assess whether it is growing or shrinking. 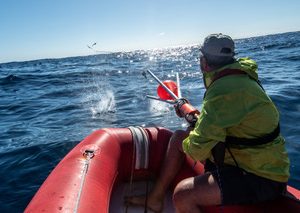 In 2021, scientists used nets to catch New Zealand storm petrels at sea in the Far North.
By Edin Whitehead, www.edinz.com

Anecdotal reports at sea suggest that sound kaitiakitanga by mana whenua and DOC is bearing fruit. Good numbers of birds are being spotted near Hauturu, and surprisingly much further afield—all along the east coast of the North Island, and even as far as Fiji and the east coast of Australia.

We wondered whether these extensive sightings mean there might be additional storm-petrel breeding sites on other predator-free islands around the upper North Island, which would give reassurance that the birds don’t lay all their eggs in one island basket. However, given the secretive nature and small size of NZSP and the scale of the area, the search represents one hell of a needle in a haystack.

For seabirds with distinct breeding colonies, high levels of philopatry (the tendency to always return to breed at the same place) can lead to genetic differences between sites. With this in mind the NZSP recovery group has been working with Anna Santure’s laboratory at the University of Auckland to sequence the partial genomes of NZSP caught over a wide geographic area. In 2021, we conducted two oceanic expeditions to the Far North and caught and sampled blood from 29 storm petrels at sea, as they skimmed waters located more than 300 km from Hauturu. 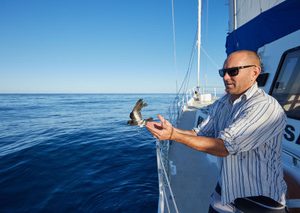 Talented postgraduate student Anika Correll Trnka has been assessing whether there are genetic differences between these birds and those previously sampled from Hauturu, which would give an indication that the northern birds originated from another breeding site. However, the results showed no difference between NZSP from the Far North and Hauturu—on average, two birds from the same sampling location are just as genetically distinct as two birds compared between sampling sites. Indeed, the DNA revealed some of the northern NZSP were the half-siblings, grandparents, or cousins of birds on Hauturu, strongly indicating that we do not have multiple genetically-distinct and unconnected breeding colonies.

As far as we know, then, the NZSP remains one of the many threatened taonga that breed only on the precious lifeboat that is Hauturu. Many questions still remain about this species, however—so watch this space.