The hihi (Notiomystis cincta) is a threatened passerine (perching) bird endemic to Aotearoa, whose closest relatives are the tīeke/ saddleback, kōkako and extinct huia. In contrast to the light brown feathers of the females, male hihi are adorned with black, yellow and white feathers, and it is likely that the Māori name for hihi reflects the flash of yellow as they fly through the forest, with hihi translating to ‘ray of light’. Hihi were once distributed across Te Ika-a-Māui and its offshore islands, but were reduced to a single population on Te Hauturu-o-Toi by the 1880s as a result of introduced mammalian predators and widespread land clearance almost everywhere else. Since the 1980s there have been a number of successful reintroductions of hihi to predator-free reserves and islands, including the nearby Tiritiri Matangi, with all reintroduced birds originating from the southwest corner of Hauturu.

Previous genetic work has demonstrated that Hauturu harbours the highest levels of diversity, with reintroduced populations capturing just a snapshot of this diversity. However, given that all earlier work had sampled hihi from the more accessible southwest corner of Hauturu, in Te Waikohare and Tirikakawa valleys, we were unsure if there was further unsampled genetic diversity in the rest of the motu. If that was the case, it could be important to sample birds from other valleys on Hauturu in the future to ensure that reintroduced populations hold as much diversity as possible to help them to adapt to future challenges, including our rapidly changing environment. 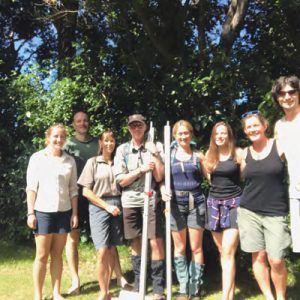 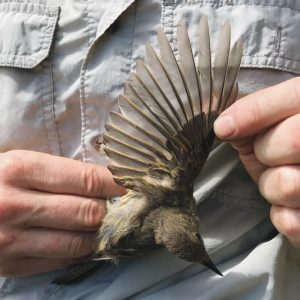 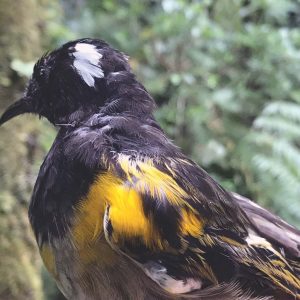 Our team of researchers from the University of Auckland therefore set out to assess levels of diversity by sampling individual hihi from Awaroa stream, Pōhutukawa valley and Mt Orau as well as resampling Te Waikohare and Tirikakawa valleys. Hardy groups of volunteers, Hihi Recovery Group members and DOC staff spent weeks clambering up and down the ridges and hanging mist nets between the trees to capture and sample the birds across two field trips in October 2017 and March 2018. In total, our team captured 74 hihi in the mist-nets, and banded and released the birds after taking a small blood sample. Later, in the University’s genetics lab, PhD student Alex Knight extracted DNA from these blood samples and examined around 20 areas of the genomen order to determine the level of genetic diversity in the hihi populations in the different sampling locations.

But in the end, Alex’s results indicated little to no genetic difference between hihi across the motu. That suggests the steep valleys don’t pose a barrier to hihi, and that the populations mix freely across the island – perhaps unsurprising for a flying bird! Interestingly, genetic diversity was actually higher in Te Waikohare and Tirikakawa valleys than the rest of the motu. These results strongly support the continued use of this region for future translocations. Not only is it the most accessible site, but the connectivity across the motu means that birds collected from there will be representative of the genetic diversity of the species as a whole.

In our work we acknowledge Ngāti Manuhiri as mana whenua and kaitiaki for Te Hauturu-o-Toi and hihi. We thank the Hihi Recovery Group and Department of Conservation for their expertise and logistical support. The field trips were funded by grants from the Hauturu Supporters Trust to PhD student Alex Knight, and the Royal Society of New Zealand Marsden Fund to postdoctoral fellow Helen Taylor.