I love the term “charismatic megafauna”. It describes endangered animal species that are large (relative to other species of the same category) and that arouse strong feelings of affection in humans.

It is hard to out-charisma a kākāpō. Anyone who has spent time with one will know exactly what I mean. They are the largest parrot in the world and they can’t fly. Plus they even smell nice, like a kind of mossy perfume. What’s not to love about that?

Kākāpō ooze personality. They make us smile. We feel a kinship with them and want to care for them. So it is entirely fitting that Hauturu – the country’s supreme exemplar of kaitiakitanga – is home to around a dozen of the 250 kākāpō alive today. 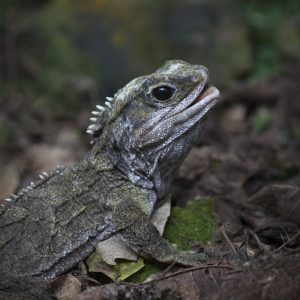 All of the kākāpō on Hauturu carry a smart transmitter. The radio signal provides the birds’ locations and analyses their movements. The transmitter on a female reports on whether it is nesting. On a male, it detects mating activity and identifies the female.

For the Hauturu rangers, Richard Walle, Leigh Joyce, and Chippy Wood, spring is the season for the yearly Human vs Kākāpō races. What prompts the tournament is that the batteries on the transmitters need to be replaced annually. Catching every kākāpō on the island is quite a challenge. It’s all very well for the rangers to receive a location signal, but there’s a good chance that the bird will be in a remote part of the island that has never been visited by humans—perhaps even on the other side of a canyon. Hours, even a day or two, of slogging through forest wilderness may be required to reach that location.

When the rangers finally draw close to a kākāpō, the fun starts. You may not think of the parrots as sprinters, but in dense forests with no tracks they could easily out-run Usain Bolt. If a bird decides to evade capture by dashing into the thick undergrowth, the rangers have no chance of catching up. They must rely instead on guile and persistence—and this always wins in the end.

The other great spring-time activity for the Hauturu rangers is supervising the weed team. From September through to December, a team of four or five weeding professionals, plus around 14 volunteers, carry out a grid search to find climbing asparagus and pampas.
The weeds are removed by hand-digging wherever possible, with great care taken to ensure that no tubers are missed. Abseiling is required on cliffs. Where that is too dangerous, helicopters are used for highly localised spraying of individual weeds, ensuring that no harm occurs to pōhutukawa or other native trees in the nearby forests.

The forest on Hauturu has a primeval feel. It is vital to keep it that way. Ngāti Manuhiri, whom the Crown has recognised as kaitiaki, are deeply committed to that. So are the DOC rangers. But they need support. Research is urgently needed to establish baselines so that the wellbeing of species can be tracked.

The Hauturu Supporters Trust has a key role to play in funding that research. We deeply appreciate your past donations. But the simple reality is that our need for your support is growing. Please go to www.hauturusupporters.org.nz/donate/ to contribute. A small monthly donation from you would allow us to make a huge difference.