The perfect start to our amazing trip was stopping to watch a pod of dolphins feeding along with various petrels and gannets which were pelting into the water between them like arrows. Closer to the island we were greeted by an impressive chorus of bellbird song, which we enjoyed as we clambered ashore across the boulders. On our way to the bunkhouse we were awed by sights and sounds of several more bellbirds (korimako), tūī, kererū, kākāriki, a flock of whiteheads (pōpokatea), curious robins (toutouwai), kākā flying high above, occasional song from kōkako, and there were saddleback (tīeke) everywhere! I saw a male stitchbird (hihi) in a tree beside the path. A large tuatara was obligingly lying outside its burrow in the undergrowth, and later that day someone pointed out a gecko on a tree trunk. There were fantails (pīwakawaka) and grey warblers (riroriro) around also, but they were definitely not the dominant songbird species, that position very much appears to belong to bellbirds. 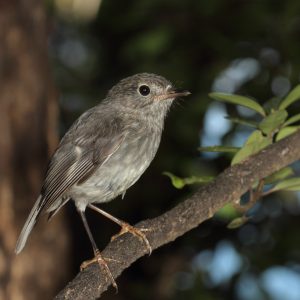 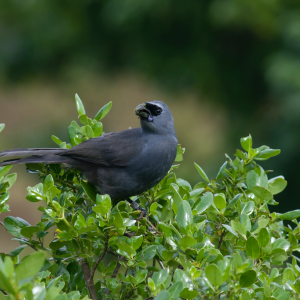 That afternoon it was very rewarding to be able to help the rangers with maintenance tasks. I felt privileged by the opportunity, and appreciate the excellent work that the rangers do to care for such an important reserve. I was also impressed by the nature collections and artwork of the two teenagers of one of the rangers, and to hear that the eldest is now at university to follow her passion for ecology and marine science.

In the evening during our barbeque dinner we glimpsed a couple of northern lesser short-tailed bats (pekapeka) flying, then on our night walk we heard and saw kiwi, came across brown teal (pāteke) grazing and moreporks (ruru) on the ground searching for insects in the grass. We saw a wētāpunga feeding on mahoe leaves and a tree wētā nearby, which put the size of the giant wētā into perspective!

A robin, saddleback, bellbird, kōkako and tūī had turns at drinking and bathing in the pond, and a kākāriki watched from a bush nearby.

I slept under the bright stars on a perfectly clear night and drifted off to sleep to the sound of the waves rolling in over the nearby boulder beach and the distant call of kiwi (and one very close by). I woke soon after 5am, noticing that kākā were some of the first risers, squawking high in the sky, while kiwi were still out and about near the bunkhouse until just before sunrise. Tūī were the earliest of the songbird risers, followed by bellbirds, kōkako and saddleback. I spotted four kōkako high up in a tree near the bunkhouse and recorded some of their wonderful haunting song.

We had a nice walk on Sunday, guided by a ranger and our knowledgeable group guide, starting along the boulder beach then up along a bush track crossing back and forth a few times over a currently dried up boulder river bed. We stopped at a pool of water in one part of the river bed and saw a few banded kōkopu and a longfin eel. I was treated to some hihi calls, which were just audible over the day long ‘dawn’ chorus of the immense number of songbirds.

Later that afternoon, three kōkako were bouncing along the ranger’s lawn, the two fully fledged youngsters occasionally being fed by a parent despite proving to be very capable of feeding themselves. A robin, saddleback, bellbird, kōkako and tūī had turns at drinking and bathing in the pond, and a kākāriki watched from a bush nearby. The day was topped off nicely by an encounter with a young tuatara sitting outside its burrow beside a bush track. It came scurrying towards us to within a couple of metres, then posed for photos before heading back towards its burrow.

As a member of the Ornithological Society, the major highlight of the trip for me was seeing New Zealand birds being able to safely behave as they have naturally evolved, regularly feeding and interacting with each other on the ground. Te Hauturu-o-Toi truly is nature at its best!

Ngā mihi – Thank you to our Little Barrier Island (Hauturu) Supporters Trust team and DOC for coordinating our trip.